Lana Jelenjev, Saskia Wenniger and Tjerk Feitsma of the Neurodiversity foundation, are holding talks with interesting and inspiring individuals that have a keen knowlegde about the topic of growing despite adversity. The talks will be streamed, and published on this page.

Siena is one of the youngest well known neurodiversity advocates and she is from London. She classes herself as a ‘maths and physics nerd’ and claims her dog is the cutest dog in the world. Siena is also neurodiverse: She is autistic, dyslexic, dyspraxic and has ADHD. She founded the Neurodiversity Celebration Week and wrote the book: ‘The Spectrum Girls Survival Guide – how to grow up awesome and autistic‘. In the Growth Through Adversity talk, we dive into bullying, changing the school system and how the struggle can become your strengths.

Dusty Chipura is an ADHD Coach based in Vancouver, BC who works with clients across the lower mainland, Fraser Valley and worldwide. She is currently in the process of earning her ACC, PAAC and ICF Accreditation for ADHD Coaching. Dusty earned her Bachelor’s of Arts degree at the University of British Columbia.

Dusty, along with many loved ones in her life, has ADHD. Her passion for helping others to understand and master their ADHD led her to coaching. Dusty is an accomplished musician, writer and community participant. in 2017 she helped found the first Girls Rock Camp in Mexico and is currently on the board of directors for NNW Scholarship Foundation, providing post-secondary grants for students in northern British Columbia as well as CFRO Vancouver Co-Op Radio, a co-operatively owned community broadcast station.

Adrie van der Meer is a late diagnosed adult of autistic spectrum condition when he was 27 years old. He has helped establish Autistic Pride events in the UK and has connected with autism advocates from at least 50 countries around the world.

Will is the founder of The Dyslexic Evolution. He is a proud dyslexic entrepreneur, leadership and business coach and passionate motivational speaker. His vision is to help dyslexic people achieve success in their careers and create more dyslexic leaders.

The world has evolved around technology and different ways of thinking. He believes dyslexic people’s problem-solving skills is what will help build the future.

Professor Amanda Kirby is unusual, as she is a qualified GP but changed career when her 2nd child was diagnosed with Dyspraxia at 3 years of age. Her experience and frustrations ( at times) as a parent finding her way round the health and educational system led to her consequently starting up an interdisciplinary specialist centre for parents and children ( later on adults) more than 25 years ago in order to be able to provide practical support.Her family is very neurodivergent and this has provided her with a unique understanding, insight and a passion to raise awareness and champion best practices.

She is an emeritus professor at the University of South Wales. She has lectured to more than 100,000 individuals worldwide, written over 100 research papers and become internationally recognized in the field of neurodiversity as both a clinician and researcher. Over the years she has written 9 books for children, parents, the health and educational professionals and for those in the workplace and have been translated into different languages.

She has delivered consultancy, tools and training to organisations including South Wales Police, Admiral, RAF, JP Morgan and for DWP and MOJ.

Her research has always lead to ways to provide practical solutions that make real changes for families and clinicians. Her PhD ( after she became a professor) was relating to to the changes that go on in adolescence in emerging adulthood and she developed screening tools which are now used internationally.

Amanda has been on government advisory boards (e.g. Hidden Impairment National Group) as well as advising UK and international charities in the field of neurodiversity. This includes being a patron of the Dyspraxia Association in New Zealand, Chair of Movement Matters UK and works with great UK charities including the Dyspraxia Foundation, British Dyslexia Association, North East Autism Society and the ADHD Foundation. She acts as a clinical advisor to the Witherslack group.

Ten years ago she realized to reach and support more people effectively she needed to develop web based solutions with her colleague and psychologist, Dr Ian Smythe. Too many children and adults needs were missed, or being misunderstood and this was potentially costing thems and society a lot of money

Amanda is currently the CEO of Do-IT Solutions, a tech-for-good company and has developed unique person-centered computer profiling tools and apps to support neurodiverse children and adults in a range of contexts including education, prisons, and employment settings used nationally and internationally.

Do-IT is a Disability Confident Leader and was the first to gain this status in Wales.

Her passion to make changes in society and increase the chances of showcasing talents in neurodiverse children and adults into and in work remains as strong as it was 30 years ago.

Siobhan Lamb is a neurodivergent writer, speaker, educator and advocate. 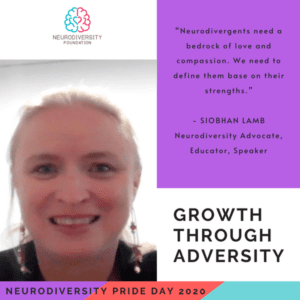 “My husband, three children and myself are a family of acronyms! We are all Neurodivergent with a mix of Autism, ADHD, giftedness, Dyslexia, Dysgraphia and Dyspraxia. An experienced teacher with a demonstrated history of working in the education industry for over 20 years in Special Education (specializing in Autism, ADHD, Giftedness and Dyslexia), Science, Stem and Maths in both Australia and Singapore. I started my career completing a BSc and then simultaneously completing a PhD in Physical/Theoretical Chemistry and a Masters of Teaching. I am currently completing a Masters of Education in Cognitive Diversity (2e). I hold a unique position as a Neurodivergent Advocate for children at school.

I have sat in everyone’s chair: the teacher, the parent and the child themselves. I hope that through presenting talks and workshops relating to Neurodivergent children from the age of 8-18 to both parents and teachers that we can forge a world where our Neurodivergent children are seen through a strength-based lens rather than a deficit-based lens. Where they feel understood, heard and embraced for their strengths which will enable them to be defined by their strengths and to succeed!” 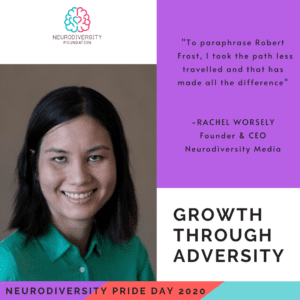 Rachel Worsley is the founder and CEO of Neurodiversity Media, a media company that promotes accessible storytelling augmented by technology. She edits the NeuroWork newsletter, which translates original research about neurodiversity in the workplace into stories and resources that empower the neurodivergent community, their supporters and business. Rachel has a background in medical journalism and legal marketing.

Her personal experience being diagnosed with ADHD and autism in 2018 led her to pursue entrepreneurship, first by founding a creative business before starting Neurodiversity Media in 2019. She is based in Sydney, Australia.

If you were unable to join us in pride day: The wisdom of our speakers will also be shared with the Neurodiversity Education Academy. After the Neurodiversity Pride Day itself, the talks will be shared there, for free, as part of our courses on neuroinclusion and the growth mindset. You can find more interviews on the Divergent Interviews page, and on the Krachtig Anders videoseries page.